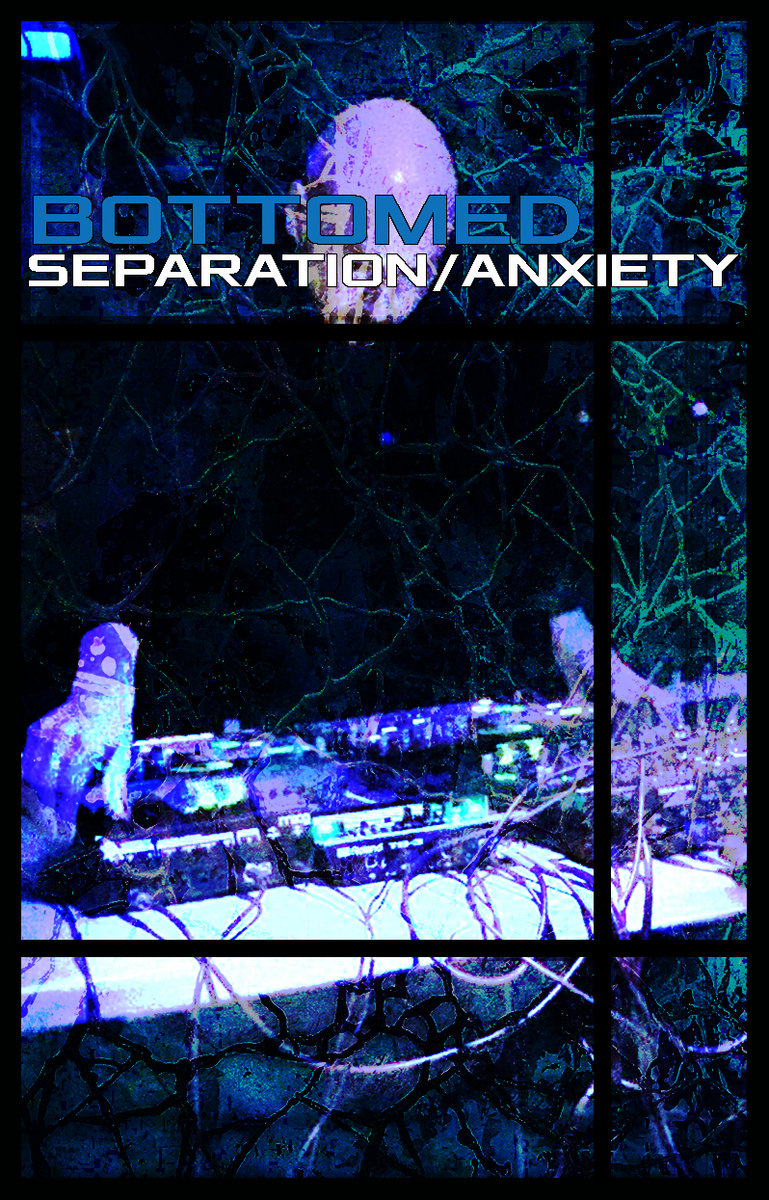 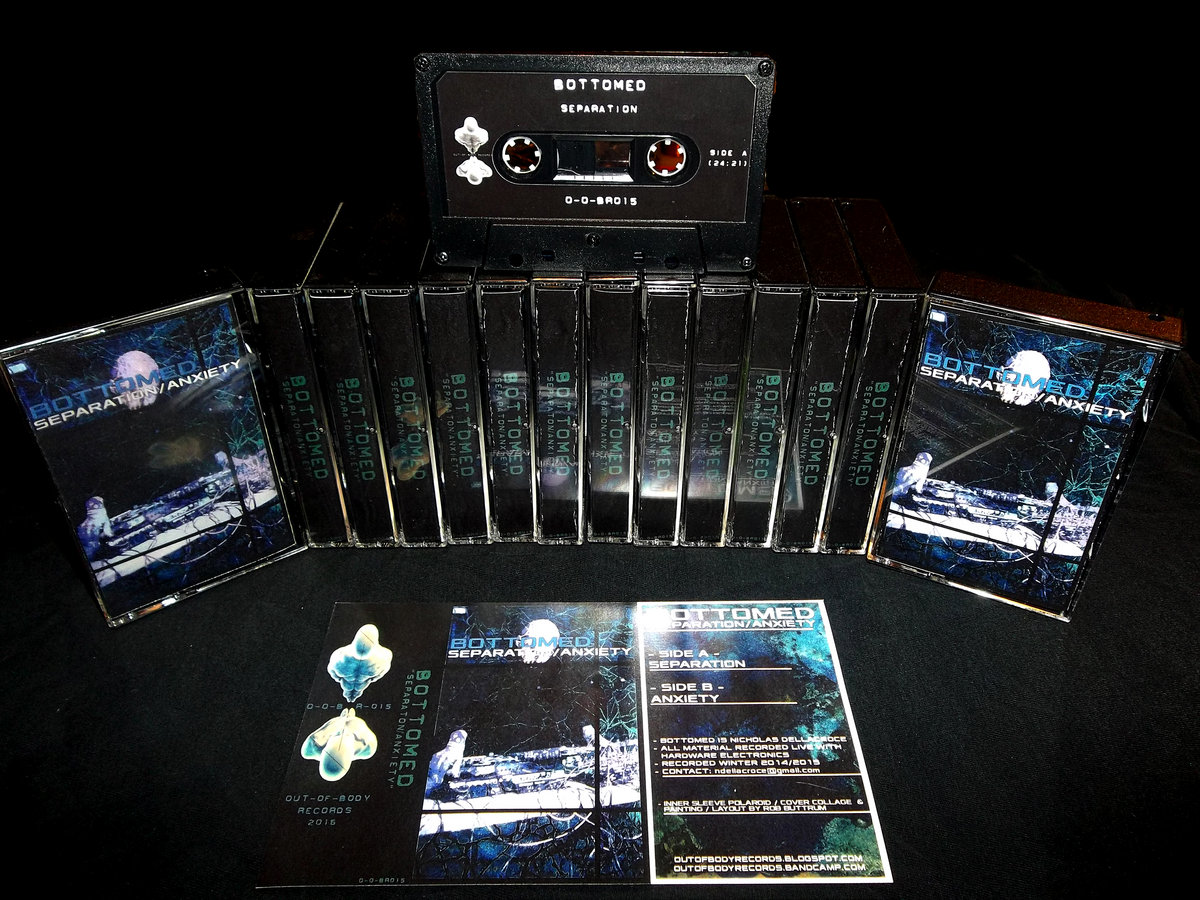 BOTTOMED - A HEAVY BLOW, AN EXCESSIVE DISPLAY OF FEAR AND DISTRESS ARE THEMES IN THIS DARK ODYSSEY - PHYSICALLY, MENTALLY AND MUSICALLY. NICK DELLACROCE (OF BONGRIPPER FAME) MASTERFULLY CRAFTS TWO LONG TRACKS OF GRIM DRONES, UNCOMFORTABLE PULSES, BROODING SYNTH LINES, AND COLD RHYTHMS. SIDE A STARTS WITH SUPER LOW END/BASS HEAVY SYNTHS PLUMMETING TO THE DEPTHS OF A BOTTOMLESS SEA OF DESPAIR. MAKING YOU FEEL AS THOUGH SOMETHING IS MISSING WITHIN YOUR SELF WITH A COLD DEATH INDUSTRIAL VIBE ENDING WITH A FRANTIC STRUGGLE OF CRUMBLING & DESTRUCTIVE RHYTHMIC PATTERNS APT TO MAKE YOU THINK YOUR LOSING YOUR MIND.
SIDE B IS MUCH FASTER PACED. VERY ANXIOUS AND UNNERVING, LIKE BEING TRAPPED IN A HOUSE OF MIRRORS, IN YOUR OWN THOUGHTS. OVER THINKING EVERYTHING. STRUGGLING TO FIND PEACE WITH YOURSELF AMONG THE CHAOS. ONCE YOU THINK YOU ARE FREE, YOU FIND YOURSELF FRANTICALLY TRYING TO ESCAPE AGAIN. BUT AFTER A WHILE THE ANXIETY STARTS TO STRANGELY TURN INTO CALMNESS / PEACE. A TRULY OPPRESSIVE & INTENSE, YET BEAUTIFUL SLAB OF MUSIC! 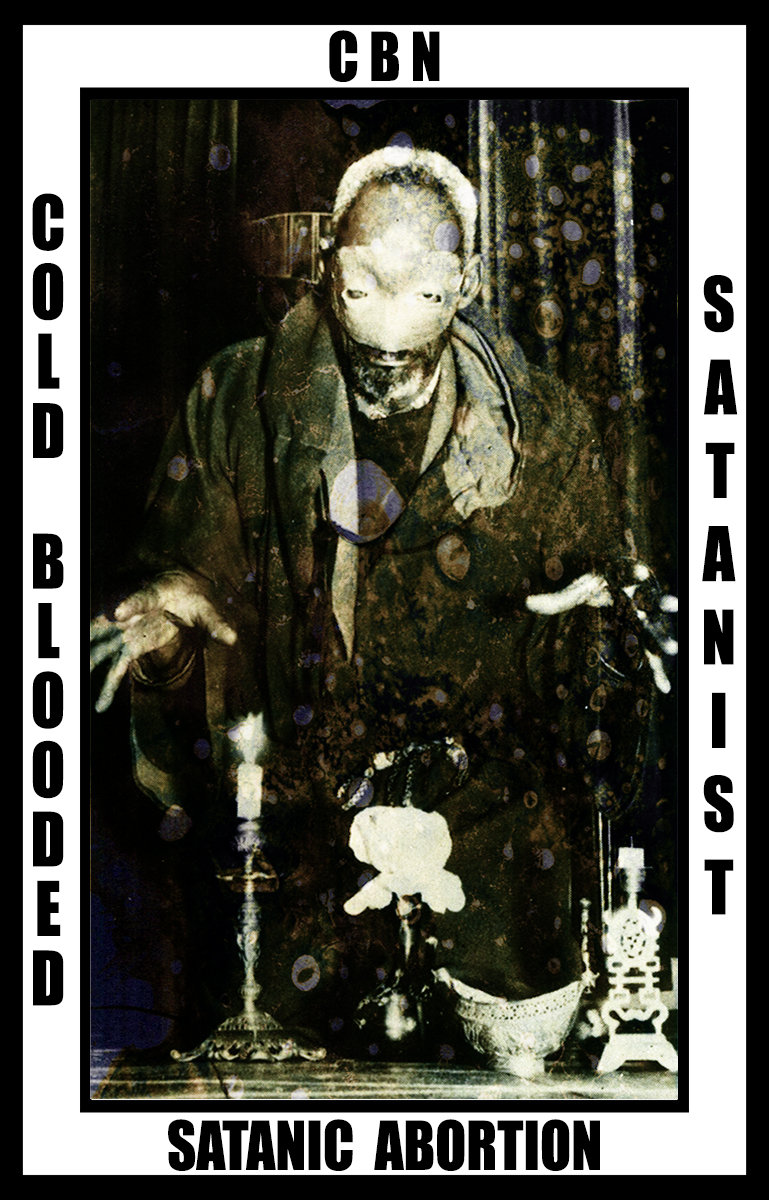 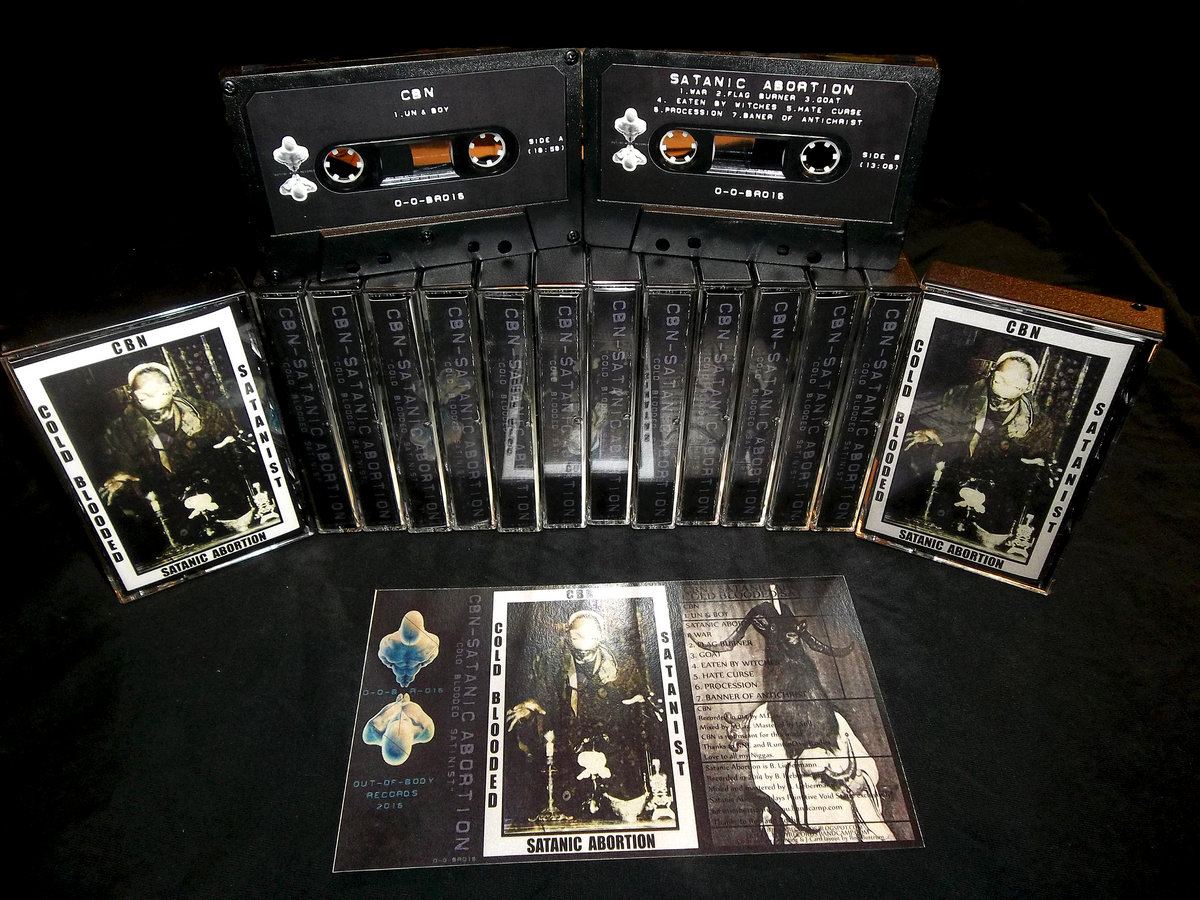 A HEAVY HITTING SPLIT OUT OF OMAHA NE - CURRENTLY ONE OF THE BEST SCENES IN THE U.S. TWO OF MY FAVORITE PEOPLE ON EARTH, COMPLETELY SLAY ON THIS SPLIT! CBN STARTS THINGS OFF WITH A MURKY & BROODING SLOW BURNER OF A TRACK. HEAVY AND THICK, MENACING DRONES SLOWLY DEVELOP WITH UNCOMFORTABLY BURIED VOCALS INTO FOREBODING SYNTH PROGRESSIONS CREEP INTO STREET KNOWLEDGE SAMPLES THAT DIVE BACK INTO MORE TORTURED VOCALS AS IF THE CRIES OF SOMEONE THAT HAS BEEN BURIED ALIVE. THIS IS SOME SERIOUSLY SINISTER STRAIGHT SATANIC GANSTA NOISE. SATANIC ABORTION KICKS HIS SIDE OFF IN THE NASTIEST WAY POSSIBLE. DISGUSTING BUBBLY NOISE INTRO, BLASTING INTO A FULL ON NOISECORE ASSAULT. 8 TRACKS OF COMPLETELY WRETCHED NOISE OVERLAID WITH INSANE BLASTBEATS AND OTHERWORLDLY GRINDING, LAYERED WITH W.S. BURROUGHS SAMPLES, BLACK NOISE AND BRUTAL DEMONIC VOCALS. BOTH SLUDGY AND LIGHTENING FAST AT THE SAME TIME. REPULSIVE, AND RELENTLESS. SOME OF THE BEST NOISECORE / SATANIC BLASPHEMOUS NOISE RECORDED IN A LONG TIME. SICK AS FUCK! THIS CASSETTE IS PURE UNADULTERATED FILTH. EVIL TO THE CORE. NOT FOR THE FAINT OF HEART!


Posted by OUT-OF-BODY RECORDS at 8:56 PM No comments: 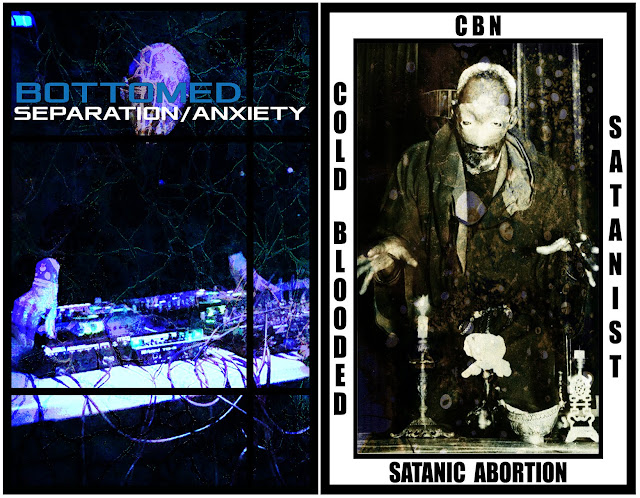 Posted by OUT-OF-BODY RECORDS at 2:29 PM No comments: 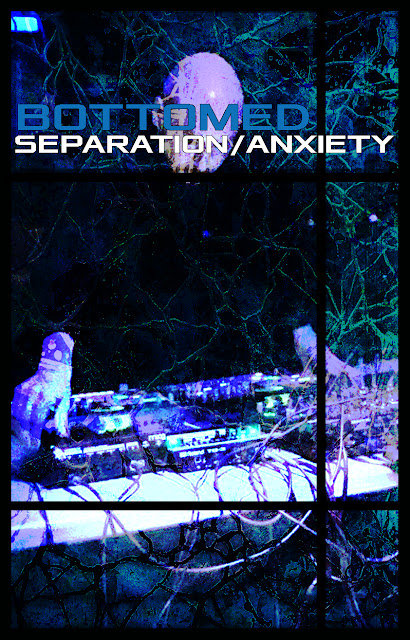 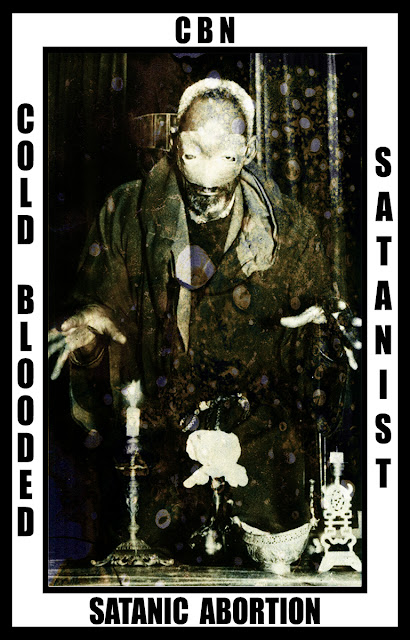 Posted by OUT-OF-BODY RECORDS at 11:48 AM No comments:

CHECK OUT TRACK SAMPLES FROM THE UPCOMING CASSETTES FROM CHICAGO'S BOTTOMED & THE SPLIT FROM OMAHA'S CBN & SATANIC ABORTION.
THESE HEAVY TAPES WILL BE DROPPING THIS NOVEMBER. CHECK OUT THE PREVIEWS HERE:

Posted by OUT-OF-BODY RECORDS at 9:34 PM No comments:

"GHOST MINER is one of the newest cassette releases from the relentlessly consistent OUT OF BODY RECORDS from Denton, TX. GHOST MINER continues in the rich tradition of broken sounding, analog styled heavy electronics that the label
has slowly and steadily become known for. This release doesn’t waste any time cutting to the in ear throb chase with their unique style of beat driven dark electronic offering on the Texas label. “Shadow Factory ” does the style properly and uniquely with sliding, scraping high end bustled to completion through heavy, blown off the radar beats, murky,
Dissonant synth work and hauntingly cavernous and muffled, gnawing vocals. These are actual
SONGS, and they’re good !
Comprised of dense layers of distorted, ripping percussion, rhythmic yet blown out
Voice/Sample Snippets, and wavering nauseous bass / synth lines and the bleeb of a faded radio transmission, GM, digs deep into a toolbox of esoteric sounds and obtuse strategies . As the album progresses, more vocal forward pieces shine out, notably “Slither” and “Vacant Eyes” The album Is comprised of several shorter tracks per side, most clocking in around two minutes or so, but there’s a definite and intentional flow to the whole album. “Shadow Factory” pays its respect to early minimal Industrial, electro, and dark electronics, pulsating and wringing its own sonic neck , to a sonic palette not entirely detached from say a chopped and screwed early Nocturnal Emissions, or a sped up Pan Sonic blown out through a rickety, on its last legs tape player, or even with reference f early TG or Tuxedomoon, but in no way is pigeonholed into this style. Ghost Miner has a wide variety of timbres and aural architectures that are explored and exercised to a healthy degree through out the entirety of “Shadow Factory”. The voice is often exposed in a muddled, Dissonant lofting style, curdling in the background but always in the pocket. As a fan of heavy dark 80’s music, I’ve heard lots of post industrial vocal stylings all riffed off of Portion Control, Tuxedomoon and the like, but GM creates a dirty, in the background style of voice , moaning of agony and confusion, which is referential, yet original, distinguishable, yet mysterious, and it’s the perfect cherry on top of these funky, post industrial esoteric works on this album. highly enjoyed the cassette and will be looking forward to more from Ghost Miner in the future!" - DECAY CAST
LINK TO DECAY CAST REVIEW
Posted by OUT-OF-BODY RECORDS at 9:53 PM No comments: 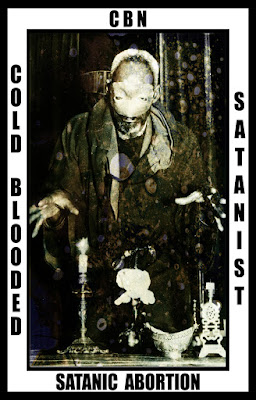 COMING THIS FALL,  ALONG WITH: BOTTOMED "SEPARATION/ANXIETY" .... KEEP YOU EYEZ PEELED!!!
Posted by OUT-OF-BODY RECORDS at 12:55 PM No comments:

Posted by OUT-OF-BODY RECORDS at 8:14 AM No comments: